Every year, every state projects upcoming state tax revenues. It matters a lot. These estimates are used by legislators, technocrats, and the governor to determine spending for schools, health care, and agency or program in government. Sometimes, when states are on a biannual budget, spending must determine spending for two years. Imagine trying to estimate your living expenditures for two years. The Pew Center on the States and Rockefeller Institute of Government released a report on this issue.

Even though recessions are becoming less frequent (e.g., great moderation), state revenue estimates are increasing inaccurate. I have covered Iowa revenue estimates before and it turns out the same pattern is being exhibited nationwide:

In 2009, the median error among states was an overestimate of 10.2 percent. That equated to an unexpected revenue shortfall of nearly $50 billion in person income, corporate income and sales tax revenues. In a year when state policy makers faced $63 billion in midyear budget gaps–coming atop $47 billion they had already closed when crafting their budgets–this misestimate posed a significant challenge.

The similar pattern between Iowa and the nation is remarkable. Here is a recent graph that shows the relationship between Iowa revenue estimates and actual revenues for December:

Project and actual are the same curves, but project is a bit lagged. A similar graph for all states shows a similar pattern:

Pew Center on the States/Nelson A. Rockefeller Institute for Government, Cracks in the Crystal Ball, Exhibit 4

Again, revenues are overestimated at the beginning of a recession, underestimated during recoveries.

Much of the problem stems from a basic statistical issue, it’s rare that the economy turns. Since 1991, the economy has only made six “turns”–we’ve come out of three recessions and recovered from three.* Even very sophisticated statistical models will likely miss these “turns”. So what can we do to ameliorate these difficulties?

Each are a good suggestion. I really can’t fathom providing accurate estimates without #3 and #4 being met.

A fifth and sixth recommendation should be:

My fifth recommendation is somewhat technical, but important. To illustrate the importance, consider projecting a path of a hurricane. Below is an example of such projections. The projections show the hurricane will hit New Orleans (this is 2008’s Hurricane Gustav). But notice the margin of error around the projections? These are the estimated errors, and they are very important to forecasting. 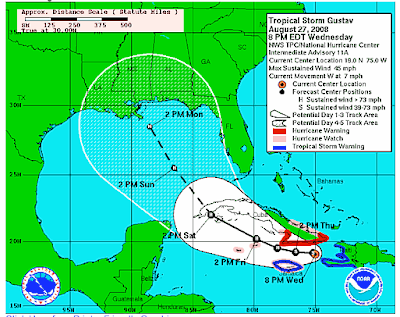 There are equally important to budget forecasts. If state revenue estimates are truly becoming more inaccurate, then that means these errors are becoming more important. If revenue projections aren’t an exact science, then perhaps we should better present the data as an inexact science. Gustav? If you recall, didn’t land in New Orleans, but in nearby Cocodrie–within the range of the hurricane’s predicted path.

My sixth recommendation is also important. There are tremendous resources at the federal level that permit fairly accurate projections. As economies change, we may need to look at different sets of data to forecast future economic fluctuations. Some recent innovative practices is using road tolls to “nowcast” the business cycle.